Defibrillators or Automated External Defibrillators – AEDs as they’re known for short are the second line of defence against a sudden cardiac arrest. CPR is the first emergency response. We know they’re vital for our first-aiders, but better yet, any of our staff (and surrounding businesses) can use them. They come with pre-recorded instructions telling you what to do and when. It’s just better if a first-aider is available because the chances of survival are far higher when used in combination with CPR (Cardiopulmonary resuscitation).

Workplaces are required to have fire safety measures in place. Alarms, sprinklers, extinguishers, procedures. Yet, despite there being a far higher chance of one of your co-workers suddenly collapsing, defibs are not mandatory.

Ventricular Fibrillation (VF): What It Is and Why It Matters

The heart is controlled by electrical impulses. Arrhythmias relate the rate the heart beats at. Two million people – just in the UK – have an abnormal heart rate. That’s not always serious and can be controlled. Atrial fibrillation is the most common type of arrhythmia. It’s a faster than normal heart rate.

Ventricular fibrillation is a totally different beast. With this, the heart beats so rapidly, the person goes into cardiac arrest, collapses, and stops breathing, or can’t breathe normally. Because the heart is beating erratically, it stops pumping blood and since the person experiencing a cardiac arrest won’t be breathing, the brain will be starved of oxygen.

Knowing the Signs of a Cardiac Arrest

When VF occurs, the heart quivers and needs an electric shock to restore the normal heart rhythm. That’s what the defib does by delivering an electric shock. However, an AED will not shock someone who doesn’t need it. The defib first measures the heart rate and based on that, will deliver an electrical shock if it’s needed. If not, it won’t. You cannot do any harm by using an AED. You can if you don’t use it.

Important to know: A cardiac arrest is different from a heart attack. During a heart attack, the person can be responsive. The cause is a blockage, such as a clot preventing the heart from pumping blood. It is a medical emergency, and because it can cause the heart to start beating erratically, the situation can go from an initial heart attack to a full-blown cardiac arrest.

The symptoms of someone experiencing a heart attack include:

If you suspect a heart attack, tell someone, get help, dial 999, sit down, and try to relax using controlled breathing techniques. If there is a defibrillator on-site, or near-by, get someone to go get it. It may be needed.

When a sudden cardiac arrest strikes, seconds matter. Not minutes.

During a heart attack, blood flow is restricted. During a cardiac arrest, no blood is pumping through the body.

When an out of hospital cardiac arrest (OHCA)happens, remember the chain of survival…

The Chain of Survival 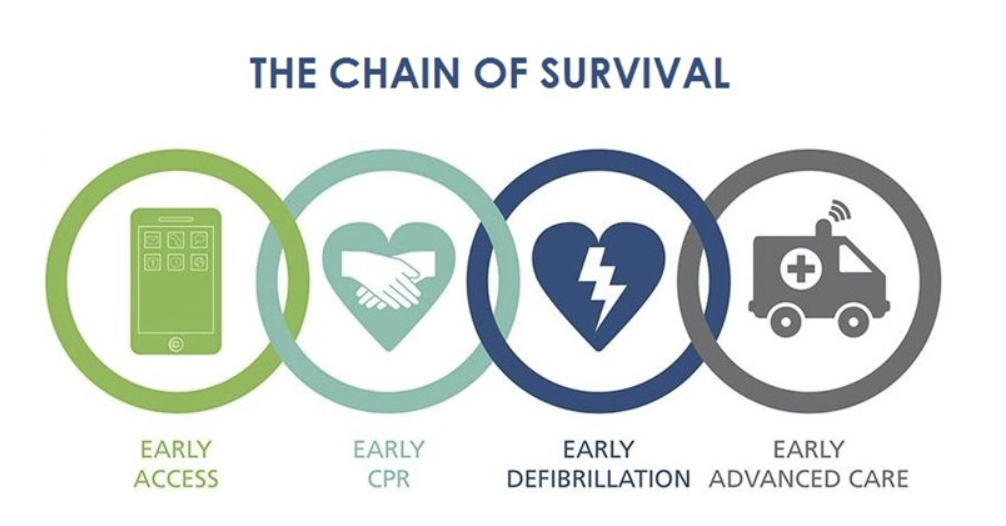 If someone in your workplace experienced a medical emergency and needed a defib, where’s your nearest AED location?

You can use HeartSafe.org’s AED finder using your post code. Searching for our offices in Inchinnan Business Park, Glasgow (PA4 9RX), it shows the nearest defib with 24/7 access is Douglas Park Golf Club in Bearsden – nearly 12 miles away taking the M8, probably 20 minutes in light traffic.

Now, touchwood, none of our team will ever need a defib, if it were needed, the chance of survival from a SCA is 90% when it’s used within the first minute. Every minute after that, the survival rate decreases by up to 10% per minute. More than 10 minutes before a defib is used, the chance of survival is less than 5%. If we didn’t buy a defibrillator, anyone on-site or nearby to suffer a cardiac arrest, it’d likely be fatal.

For other businesses within the Inchinnan Business Park Complex without a defib, it is here if you need it (touchwood you never do).

Redrock Automation are working towards ISO 9001

Facebook-f Twitter Linkedin-in Youtube
Manage Cookie Consent
To provide the best experiences, we use technologies like cookies to store and/or access device information. Consenting to these technologies will allow us to process data such as browsing behavior or unique IDs on this site. Not consenting or withdrawing consent, may adversely affect certain features and functions.
Manage options Manage services Manage vendors Read more about these purposes
View preferences
{title} {title} {title}